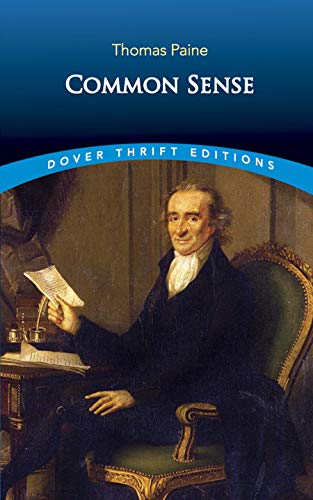 Among the most influential authors and reformers of his age, Thomas Paine (1737?1809) was born in England but went on to play an important role in both the American and French Revolutions. In 1774, he emigrated to America where, for a time, he helped to edit the Pennsylvania Magazine. On January 10, 1776, he published his pamphlet Common Sense, a persuasive argument for the colonies' political and economic separation from Britain.
Common Sense cites the evils of monarchy, accuses the British government of inflicting economic and social injustices upon the colonies, and points to the absurdity of an island attempting to rule a continent. Credited by George Washington as having changed the minds of many of his countrymen, the document sold over 500,000 copies within a few months.
Today, Common Sense remains a landmark document in the struggle for freedom, distinguished not only by Paine's ideas but also by its clear and passionate presentation. Designed to ignite public opinion against autocratic rule, the pamphlet offered a careful balance between imagination and judgment, and appropriate language and expression to fit the subject. It immediately found a receptive audience, heartened Washington's despondent army, and foreshadowed much of the phrasing and substance of the Declaration of Independence.